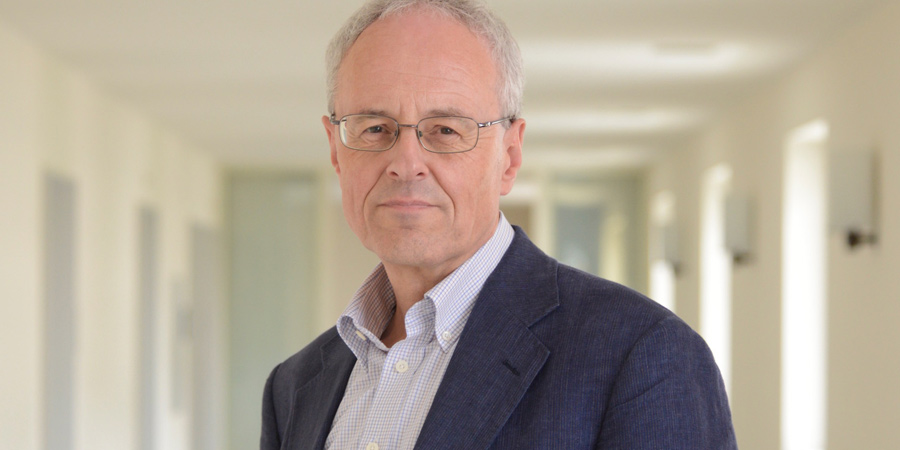 11 Dec “We help to translate research into product, which benefits patients or society at large”

Posted at 07:00h in All, Interviews by Isabelle Wymann
Share

Herbert Reutimann, the CEO of Unitectra, the joint technology transfer organization of the Universities of Basel, Bern and Zurich, talks about the ways in which his company connects university science researchers with industry and other institutions.

What is the purpose of Unitectra?

There are two main aspects to our mission: one is to foster and facilitate research collaborations for mutual benefit – we negotiate agreements for more than a 1000 new collaborative research projects every year. The other is to facilitate and accelerate the commercialization of research results in partnership with industry and by fostering the creation of spin-off companies. To this end we sign about eighty licences each year. Besides this, we do a fair bit of education, sensitizing researchers to intellectual property (IP) and technology transfer through seminars, workshops, and so on.

Unitectra manages the tech transfer activities of three universities. How did it all come about?

How hard was it to align all partners?

The creation of a joint incorporated company by the Universities of Bern and Zurich in the 1990s was a new and unusual idea and was challenging. But ultimately it was the best thing we could have done, because the process ensured that no stone was left unturned. After almost twenty years, we have never encountered a single problem among the universities. Nowadays, Unitectra is quite a unique example of the collaboration between different Swiss universities. We have offices on every campus, so it’s very easy for university researchers to access us.

What are the advantages for the universities?

The collaboration creates an organization which has the critical mass to cover the broad range of disciplines present at these universities. Our people, who have experience from working in different industries, travel between the universities ensuring that the researchers have access to a person knowledgeable in their particular field. But there are many other synergies: Each contact we make with a company for a Basel project might later be beneficial for a project in Bern, and vice versa; access to databases can be bought jointly, training materials can be used jointly. The processes and quality measures applied at the three universities are very similar and all institutions benefit from any improvements made. On rare occasions, we can even pool technologies from two different universities and licence them together.

How important to you is it to realize a return on investment?

When we approached the universities in the mid-1990s we made it clear that they should not care about tech transfer because of the potential financial returns but mainly for all the other beneficial reasons. Just to name a few, products and services that result from tech transfer activities are valuable for patients and society at large; research collaborations are favourable for both academia and industry and might foster the career of young scientists. However, I do think that universities should get their fair share if the technology turns out to be commercially successful. We license according to common business standards in the market. Currently, we have more than 100 products that are sold in the market under a license of one of the three universities.

So, your performance is not measured by the money that returns to the universities?

License revenues are one parameter but not the major aspect when measuring the performance of Unitectra. Such revenues mainly are an incentive for the researchers because most of the money goes to the researchers and their labs. While total license revenues are small compared to the overall university budgets, they can have a major impact on the individual research groups, allowing them to hire an additional post doc or otherwise boost research.

How do you balance the wish of a researcher to publish quickly and the need to wait until the IP is filed?

Universities are academic institutions, and we simply have to fit in with their ways of doing things. Publications are the key instrument for the researchers to share new knowledge and to acquire new research grants. In many cases this is no problem, because there is ample time to prepare and file a patent application during the publication process. However, we often have to patent inventions at a very early stage, even if it sometimes would be beneficial to wait until it is more mature.

How do you find partners to commercialise the IP?

Researchers and inventors are an important source as they have many contacts in their academic field – this is a very promising route. We also have a broad network ourselves – we look at patent databases, search the internet or look at who attends conferences on specific topics. From time to time we also evaluate the benefit we can derive from working with technology marketing companies. Furthermore, together with the tech transfer offices of the other Swiss universities, we list technologies which are available for licensing on swiTTlist.ch, a website which is managed by the Swiss tech transfer organization swiTT. We might also approach other organizations we work with and know well, such as BaseLaunch. There are lots of different ways, and we try to tap into as many as we can.

How long can it take?

From research in the US, we know it can take on average three to four years from the invention disclosure until a license is signed. Our goal is to find a partner in the first thirty months after filing the patent application because of the increasing costs thereafter. In a first phase, this might comprise a collaboration to further develop the technology.

How do you decide which is the right company?

We work on a case-by-case-basis, collaborating closely with the researchers to find the optimal route to commercial success. We mainly look at the commitment of a company to develop the technology: How do they want to develop the product? Do they have the resources? Do they have the know-how? How quickly can they develop it? It’s also part of the license agreement with a company to establish diligence milestones either financially or others.

Spin-off companies may not have the money to give you milestone payments at the outset. What are your opinions on that?

The licensing model is different for spin-offs, and equity in the company might be accepted as a partial compensation for the university. The main reason for taking equity is to facilitate the set-up of the spin-off company. This allows them to invest all the available money in R&D. One of the advantages of taking equity is that as a shareholder, we are well informed, something which would not be the case if we were to accept phantom or ghost equity.

Are you open to transferring ownership of the license agreement to the buyer? Or is that a university decision?

The primary goal is that research results with potential are translated into new products or services, which benefit patients or society at large, in as quick and professional a manner as possible. However, there are many reasons why a promising R&D project might get stuck, even at a late stage such as during clinical trials: The company may be prioritising alternative projects; it may lack the financial resources or even may go out of business; or it may not have the relevant know-how. We can only ensure that the company develops the technology as agreed if we remain in the role of the licensor and do not assign or sell the IP. This also avoids the situation whereby a company concerned about possible competition to one of their existing products may buy the IP in order to hide it in a drawer.

In the healthcare arena, some universities set up seed funds for potential projects. Others try to push projects forward while they are still at the research stage. What’s your take?

For me, having a range of options is best. One model might fit one project, another model may be better for a different project. The three universities we work for also have different priorities and support various instruments. Overall, universities play an important role, particularly in the early stages when there may still be open science-related questions to address, as well as proof-of-concept work or prototypes to construct – provided there is adequate money, infrastructure and know-how. These three must go together. When it comes to later stage development, regulatory knowledge, questions related to production, and so on, the project may need to move beyond the university.  An interesting model for this next step is BaseLaunch because it combines coaching and advice, infrastructure, some money and access to large companies in the field.

After gaining his doctorate in Protein Chemistry from ETH Zurich, Herbert Reutimann worked as a post-doctoral fellow at the Karolinska Institute in Stockholm, Sweden. He has held a number of management positions in various biotech and pharmaceutical companies. His responsibilities included sales, marketing, training and management development. Herbert Reutimann started in tech transfer in 1996 and has been the Managing Director of Unitectra since its foundation in May, 1999. He is a member of various professional organizations, co-founder and past president of the Swiss Technology Transfer Association (swiTT) as well as co-founder and honorary member of the Swiss Biotech Association.